Our 2022 Board of Directors

If you are interested in becoming part of the Thistle Theatre Board of Directors for future years, or on any auxiliary committees, please let us know, or contact us by email or phone,  we always love new interest! 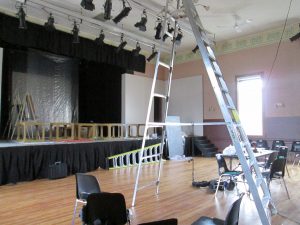 In Early 2018, our little theatre became an Accessible Facility!  Check out the news about our new Lift and Dedicated Accessible Washroom on the News & Events page.

Thistle Theatre, located in Embro Ontario, has been producing a wide variety of plays since its inception in 1994. Thistle’s main production occurs every fall, usually in November, and on the rare occasion will have a second show in the spring. This usually happens if the production is going to be entered into the Western Ontario Drama League Festival (WODL).

All of our productions take place in the historic Embro Town Hall which has seen many interesting characters over the last several years. There have been lots of orphans, a musical con artist, and a very tall rabbit. We’ve been to Brighton Beach and Camelot. We’ve been as far back as 1949, and gone Over the River and Through the Woods.

This historic building can boast something of its own… probably the province’s smallest stage! And when you think that some of our biggest productions, full scale musicals that carry a cast of 30-40 people, this is quite a feat. The hall has a seating capacity of approximately 175 people, so it’s not surprising that when we present our musicals, 1/5 of the people in the auditorium are actually on stage!

But it’s not just our stage that is cozy,  so is the welcoming atmosphere that you will receive here at Thistle Theatre. Many of our new cast and crew members, and audience members coming to visit for the first time, all say they felt like family. So come and see us sometime! Thistle Theatre welcomes you.

Thistle Theatre began in 1994. After five years of Dinner Theatre put on by the Agricultural Society, there were keen people who wanted to do more theatre in the community and take on new artistic challenges. A group of twelve began formal meetings and appointed themselves as ‘steering committee’ for a community theatre group in Embro. They were Harold and Sharon Arbuckle, Chris and Nancy Cockle, Sue and Keith Garner, Nancy and John Hazeleger,  Laurence and Mary MacKay, and Sharry and John VanderHorn. The committee obtained the Township of Zorra’s agreement to a proposal for rental of the historic Embro Town Hall, which had recently been refurbished to celebrate its centennial. The first year was a whirlwind of meetings and planning leading up to the opening production in November 1995.

A name contest was held with Annie and Dave Parker submitting “Thistle Theatre”. The logo design competition was won by Becky Dahl. Charter memberships were sold at $50 each. This seed money was used for initial improvements to the theatre. Before the first play had even been chosen, over 50 families had purchased charter memberships. In the end well over 100 were sold. The Town Hall had no sound or lighting facilities to use for a play and the ceiling was not sound enough to support a lighting bar. All these had to be rectified in time for the first performance.

And then it was opening night – November 8, 1995! The first play was “Perils of Persephone” by Dan Needles. With all the charter members in attendance, and a gala opening reception planned at the community centre, the ribbon was cut on stage and the show went on. The only hitch was that an early winter snowstorm came up, causing some people to hurry home afterward… and the Township plows were called out to keep the parking lot at the community centre open until after the reception ended.